One of the greatest love stories of all time is my affair with food. And that’s saying something because I am a truly hopeless romantic.

Ask anyone that knows me and they will tell you that when I dive into a description of my meal, it’s like I am describing the first time I fell in love. I thrive on finding new places to eat and being that person that gives good restaurant recommendations. But the most hopeless thing about me? I simply cannot eat something that I am not craving.

When I prepare a meal, even if it’s just boring old Tuesday lunch, I need to make it count. I need to have something that the mere thought of makes my tummy just a teensy bit happier. And please don’t get me wrong, not every dish I have is of Michelin star caliber. Just yesterday, I made some toast with this delicious cheese, and I was the happiest of campers.

That’s why when my 24th birthday came along, my tummy told me where I wanted to go before my head could even wrap around the options. I wanted something rich, something to truly celebrate the occasion and to me, there is no better celebration than the party in my mouth when devouring a big, juicy steak.

Cafe Chloe was a French restaurant I had been dying to go since I first heard about it. A Yelp search had told me every gory detail about the place and I was enthralled. After much drooling and poring over the menu, I knew this restaurant was something I wanted to reserve for a special occasion. The food looked to die for but the layout of the place looked just as enticing.

And I was certainly not disappointed on my special day.

Chloe was a small dive with very minimal color but lovely details everywhere. 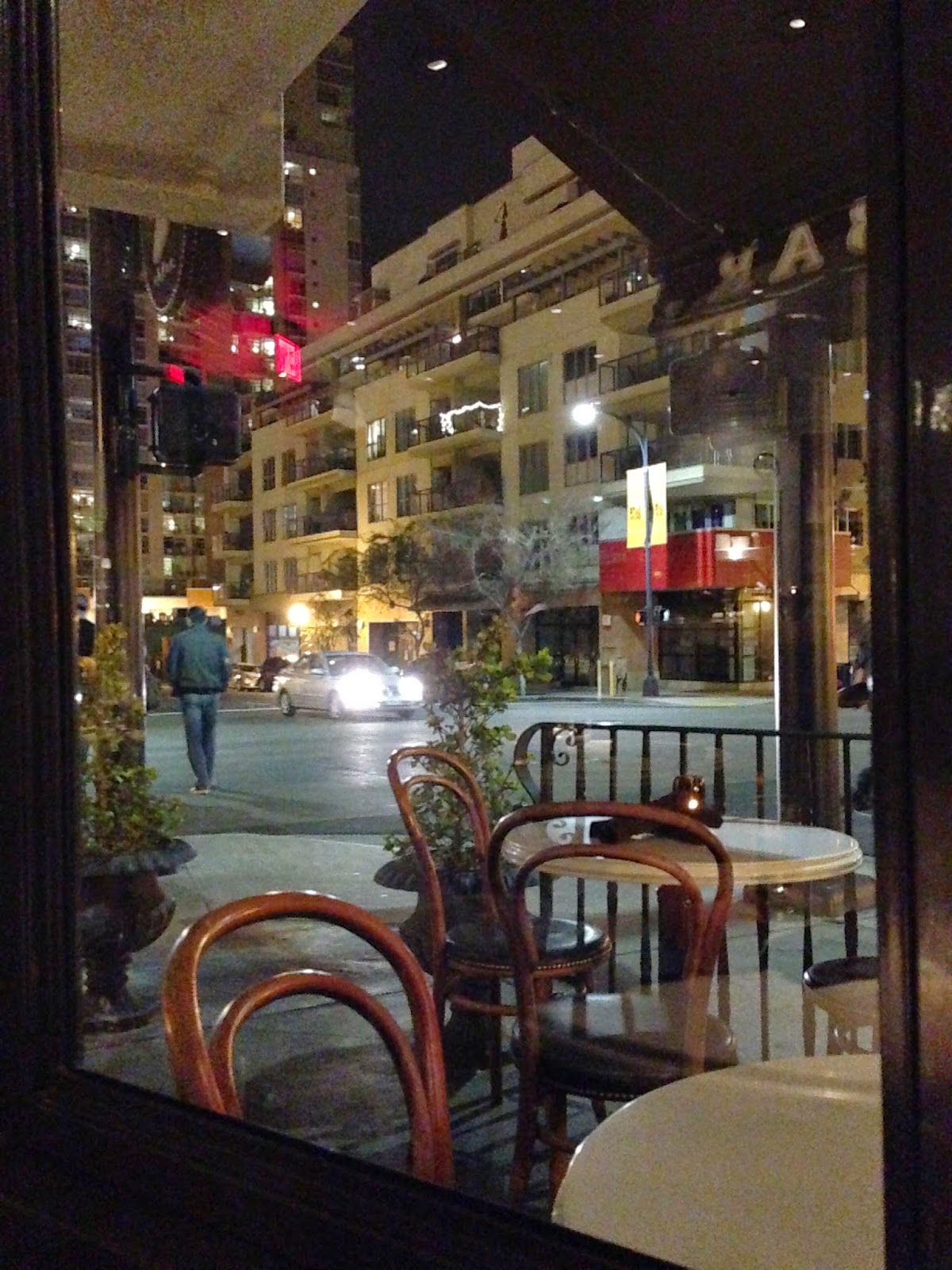 As soon as my boyfriend, Nick, and I walked in, we were greeted by a jolly bartender behind a pristine white bar. The scheme was primarily black and white with pops of dark brown in the chairs and stools. The place just enveloped you in the simple elegance of it all the moment you walked in.

A hostess directed us to a quaint table in the corner, right next to the patio and beside a portrait of a beautiful woman who I assumed to be the namesake, Chloe. The patio gave us a calming view of the streets of downtown San Diego, making the place feel open yet still intimate in our little enclave. 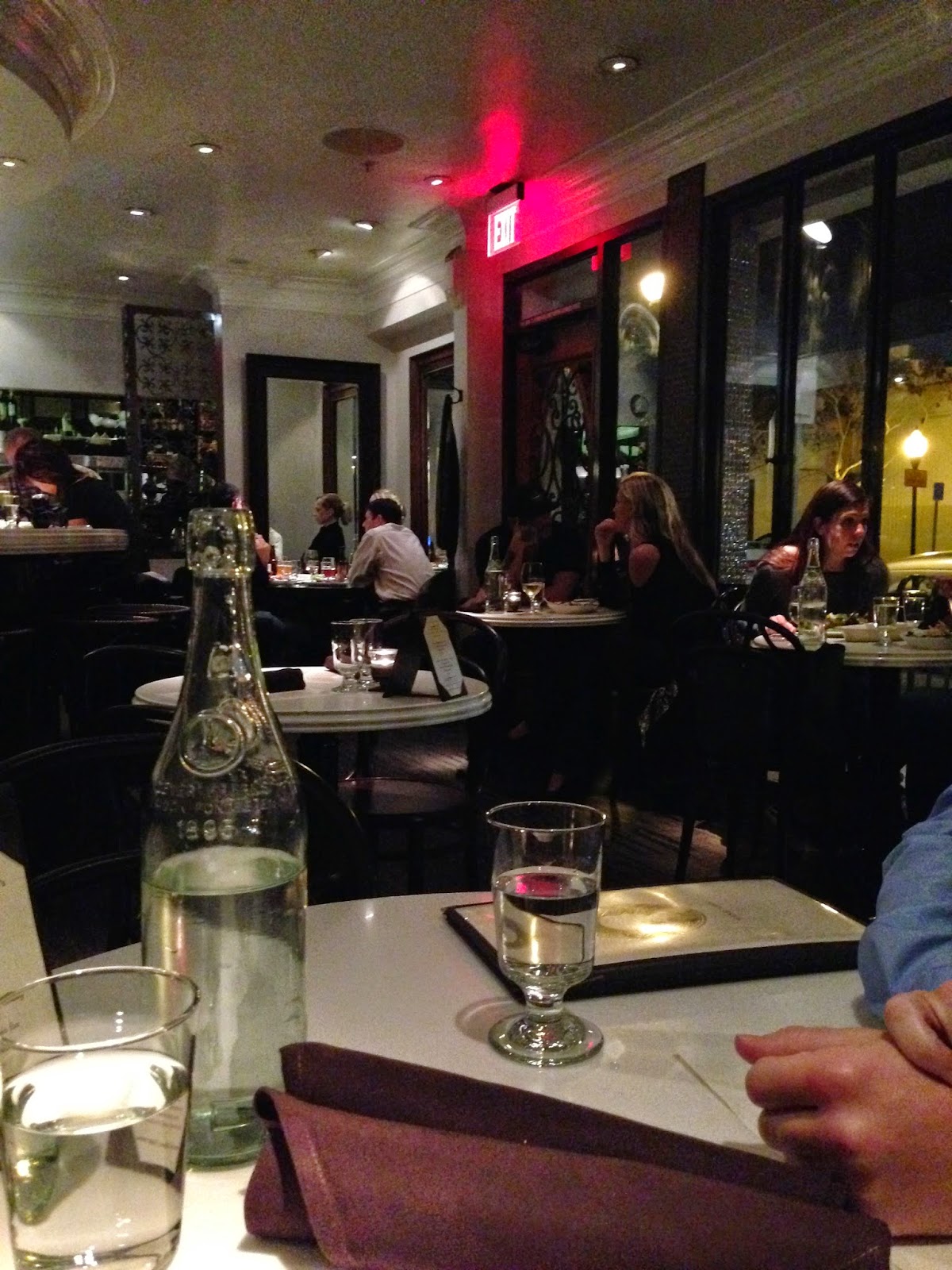 But let’s be honest, I didn’t come to this place just for the ambiance. On to the deliciousness!

The menu was a thing of beauty. It wasn’t extraordinarily designed or anything, but because everything on that menu seemed just way too tempting to be real. 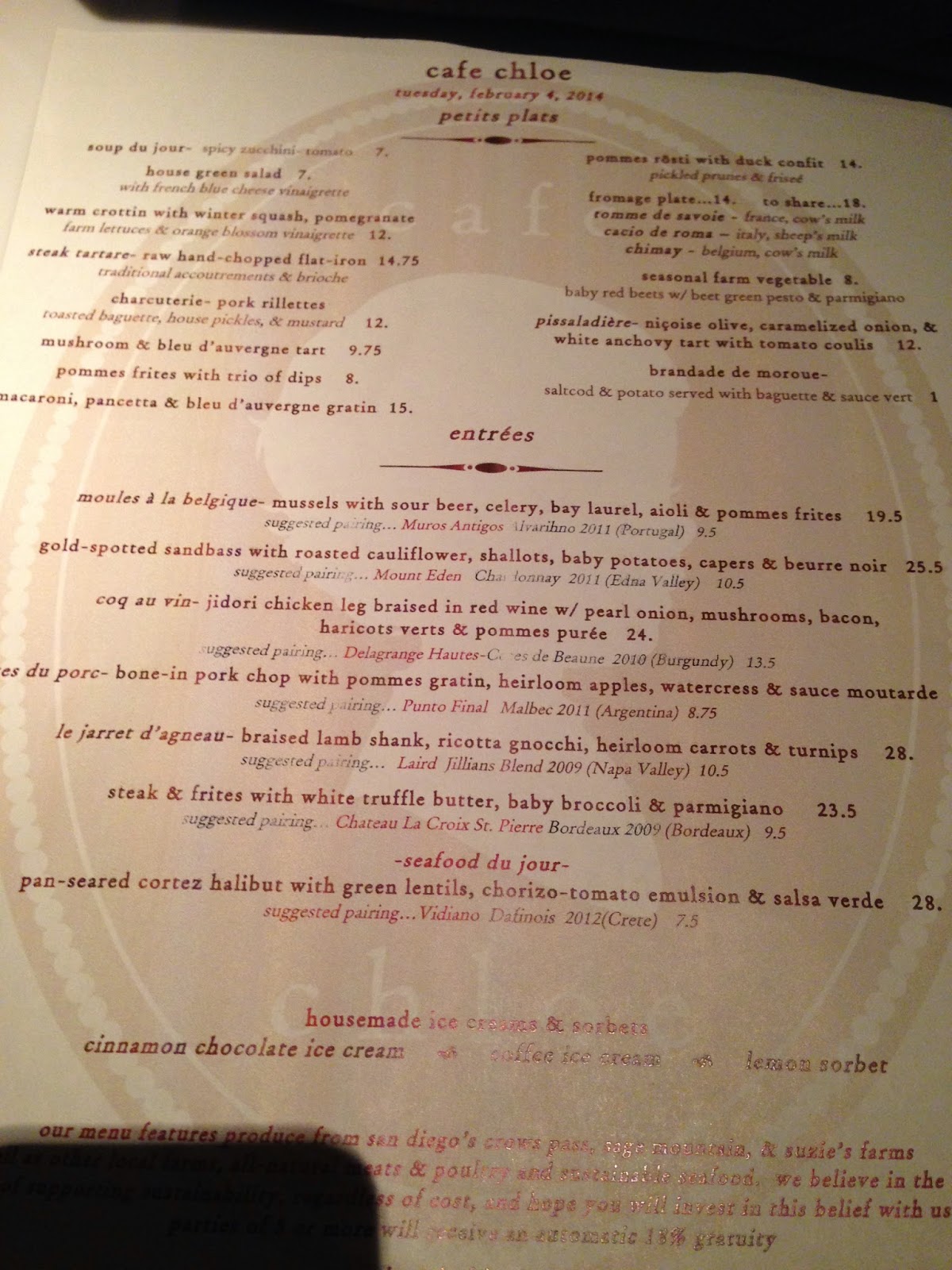 From the mushroom & bleu d’auvergne tart to the marmitako (tuna belly w/ basque style marinated peppers & garlic), I was in the seventh level of Parisian heaven. And those were just the appetizers!

Despite the little devil in me that wanted every appetizer, entree, dessert that Chloe ever offered, I spared Nick’s wallet the misery and decided to go for my favorites.

Because nothing, and I mean NOTHING, beats some good old Mac and cheese, and steak.

I had read rave reviews about the Macaroni, Pancetta & Bleu D’auvergne Gratin. But none of the words I saw on the website could have ever perfectly encapsulated the experience that is this dish. To my delight but Nick’s distaste, I could smell this plate of stinky cheese goodness as soon as it left the kitchen. 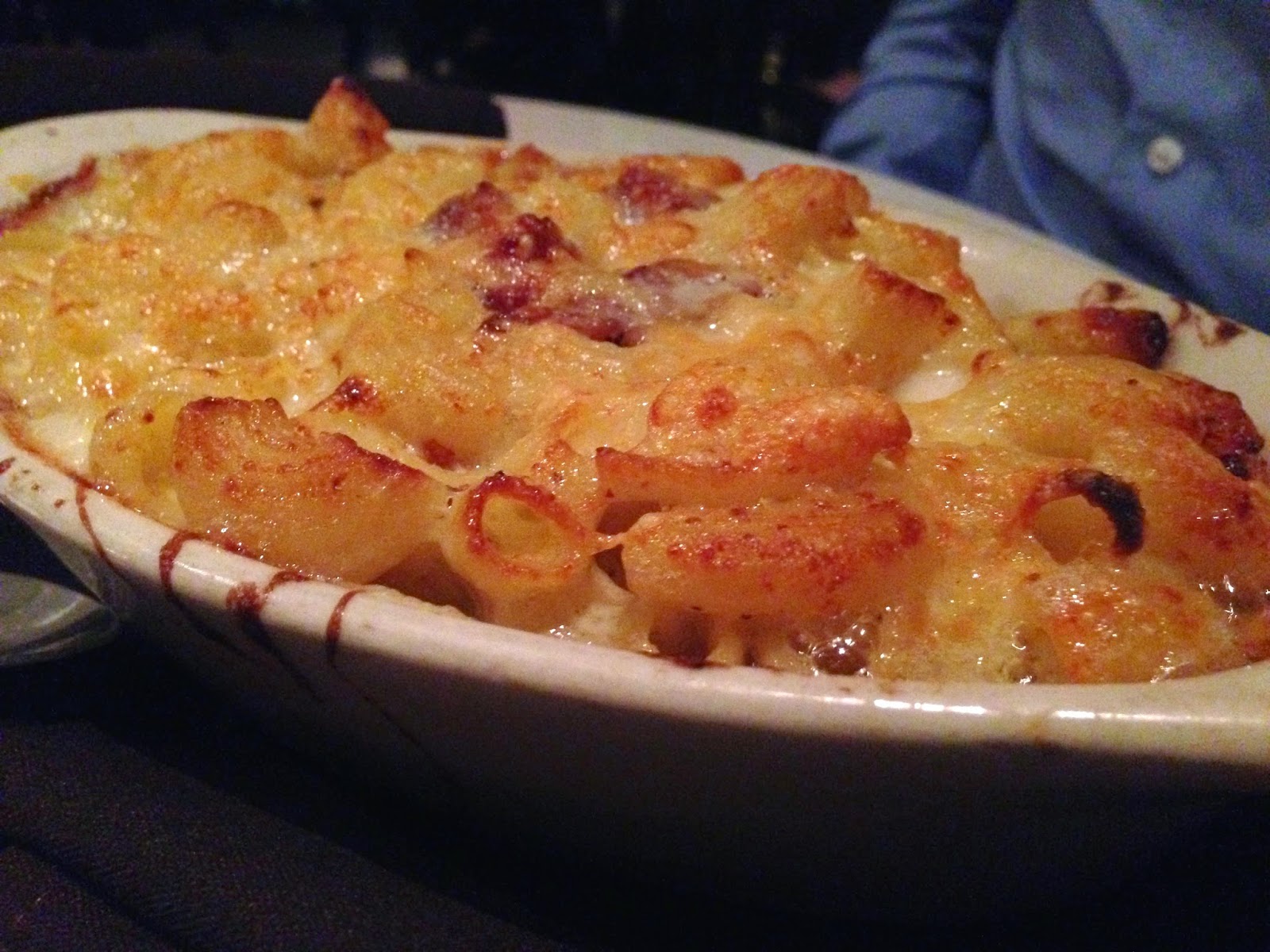 They set it down in front of us and I literally clapped at the sight of it. Cheese and I have a thing, you see, and there was plenty, plenty, PLENTY of it all over this baby. The top looked perfectly baked with those beautiful bits of dark orange splattered across and that rich white cream still simmering underneath. I took the spoon in my hand with reverence over this beautiful creature and dipped it into the edge of the plate. My heart almost literally leaped as I pulled and the ever-tempting gooey string of cheese extended from it as I lifted a portion onto my plate. 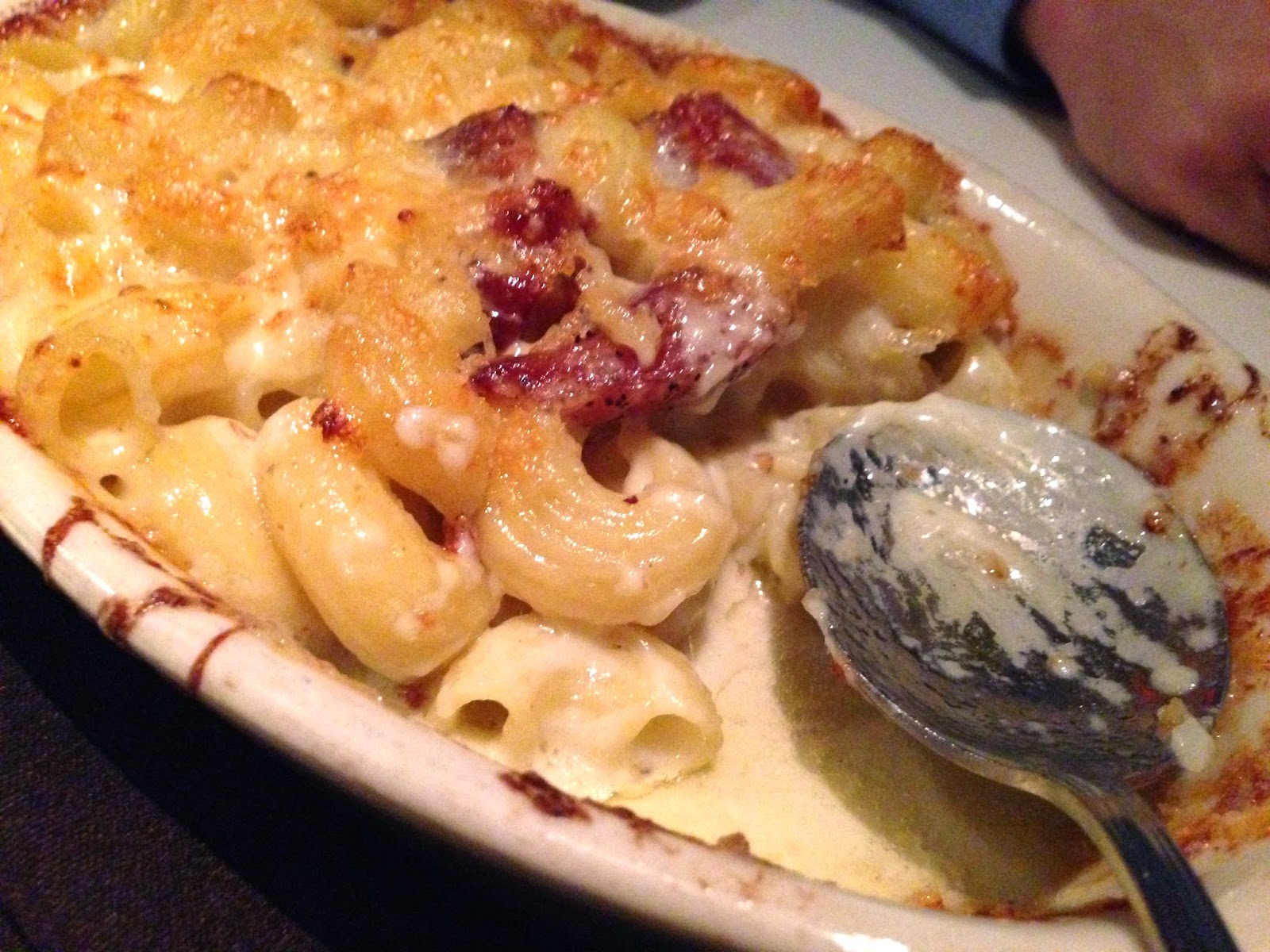 Altogether, it was a magnificent experience that I will drone on incessantly about if allowed to continue, so I’ll reign it in. The gratin was every bit as rich and gooey as I hoped it would be. Upon first bite, I had deemed the French blue cheese to be God’s gift to the earth, but especially as the tanginess was balanced out by the sweet cream. Thick squares of bacon threw in just the right hint of saltiness to vary the taste whenever the richness of the dairy began to overpower.

And, ladies and gentlemen, that was just the appetizer.

Nick and I decided we both wanted the Steak Frites, seeing as it was Cafe Chloe’s signature dish. The steak came beautifully seared on top with just the amount of pink I look for in my steaks (Warning: I often go for medium rare or medium. I love the taste of the beef altogether too much for anything darker). It was still steaming and you could see the white truffle butter just melting all over it. 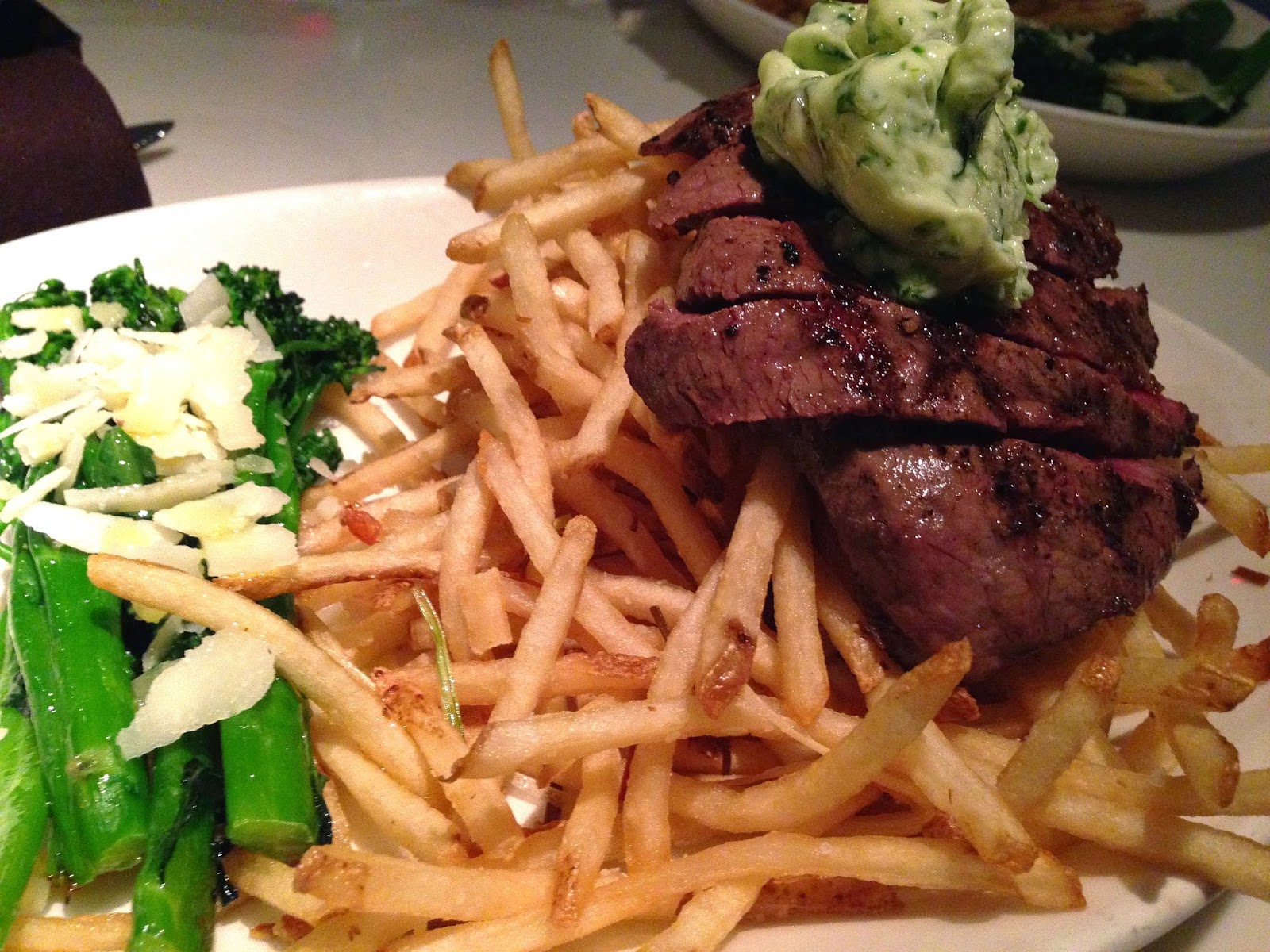 The fries were of the shoestring variety, which thrilled me because I like my fries warm and extra crispy.  Thicker fries just don't usually get that texture easily. Also included in the entree was a sizable pile of baby broccoli topped with fresh parmesan cheese. Though I am not much of a vegetable eater, keyword NOT, I did enjoy the break that the broccoli gave from the decadent selection of food I had already consumed.

Though the steak was of good quality, I must be honest and say I simply didn’t enjoy it as much as I thought I would.  Though it made for a mouth-watering sight, the truffle just didn't blend with the steak in the way I imagined it would. I am not sure if it was because the truffle didn’t get to soak in long enough or the truffle was just off that night, but altogether, it made for a rather plain steak. Great to eat at a starving moment but nothing I would run home to tell mama about.

Either way, the meal wasn’t meant to end on a flat note. Dessert was on its way and boy, was it a delectable one!

Nick and I decided to share the Pistachio Bread Pudding with Vanilla Ice Cream. Vanilla ice cream will always do the trick for me, but even I surprised myself when I decided to go for 1.) bread pudding, and 2.) bread pudding doused in an espresso sauce. See, the only bread pudding I’d ever liked was the one made by a very special woman in my life, my Yaya, who was my second mom and altogether infinitely more than just my nanny. But this… this creation was something extraordinary. Though I’d struggle to say anything could ever beat my Yaya’s homemade goods, I’ll admit that this at least came close. The squares of pudding were thick in size but, blissfully, not at all in consistency. It soaked in the mixture of the caramel-espresso sauce and the melted ice cream just enough while holding together as one soft, nutty spoonful. It was the perfect finish to the meal. 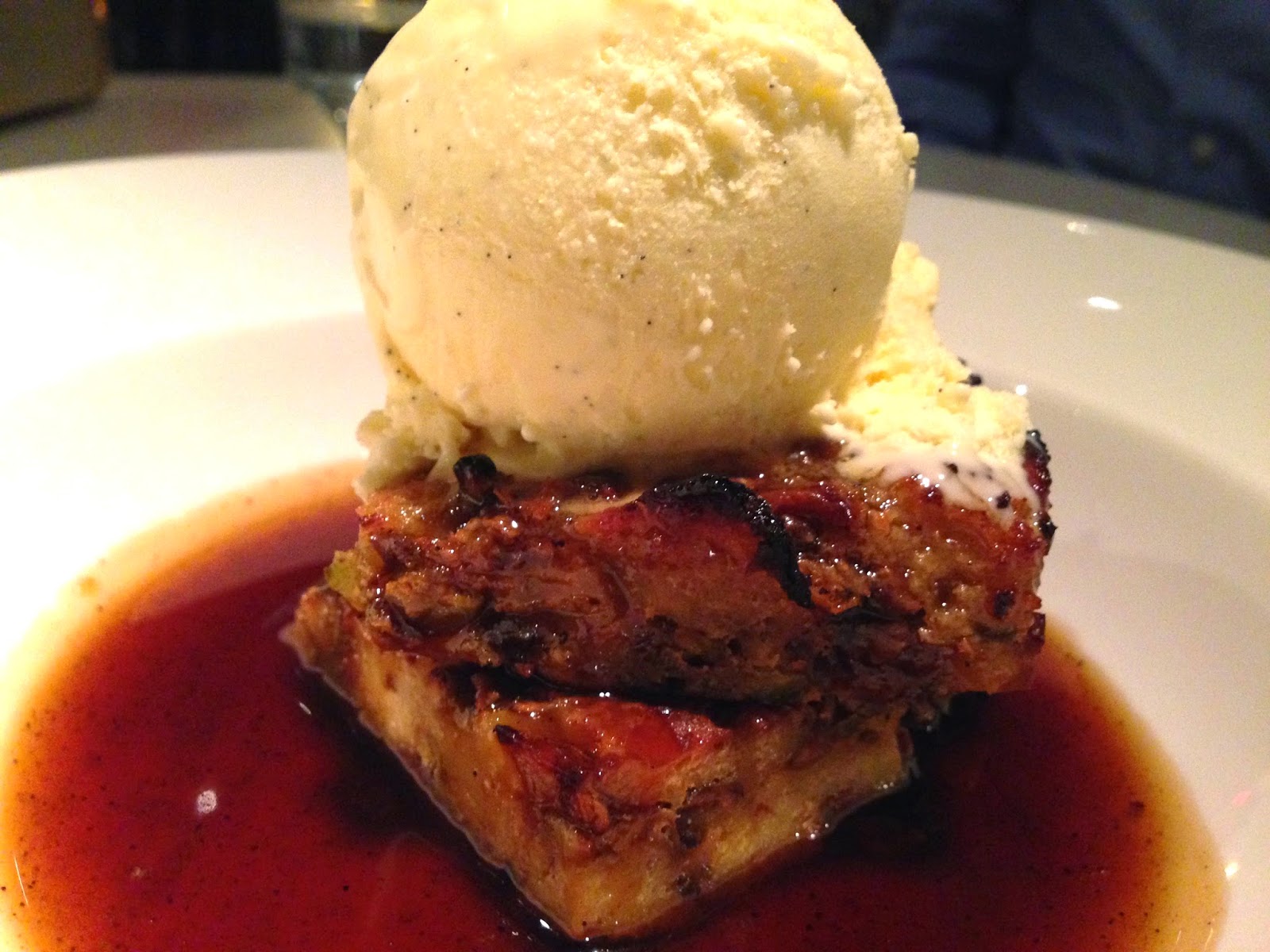 All in all, Cafe Chloe gave me just the culinary experience I was hoping for. It was a day to celebrate and Cafe Chloe allows for just that. For a total of a little less than $80 for 2 people, the price tag runs a little high for this meal but it's little compared to the warmness you feel after the Cafe has taken care of you so. The food is meant to spoil you on your special day, and the unique vibe of the place allows you to sink in no matter who you are or what the occasion really is. My birthday was one I truly savored, and I have Chloe (and of course, Chef Kim Segrow) to thank for that.